Farming can be considered a sustainable method of obtaining food for your citizens, though farming for many seasons in one place will ruin the soil.[1] Though, the developer has confirmed that soil degradation has not been implemented. 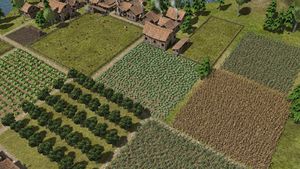 Each type has slightly different characteristics. Bean grows the quickest and tend to reach 100% yield during Summer, thus harvesting tend to already ongoing in Early Autumn. Squash is very resistant to cold and can survive temperature as low as -2C. 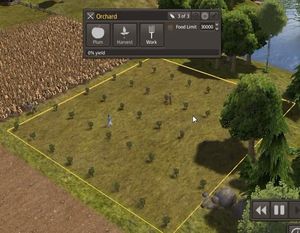 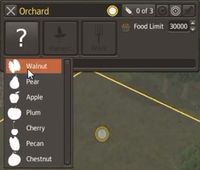 Orchards are used to produce Fruit and Nuts such as listed below. Orchards need to be planned and planted well before use because they take roughly four years to grow enough to produce anything. It is worth noting that as trees in an orchard grow older they do produce more goods.[3] However, older trees will die and require replanting.[4] Orchards can also be affected by infestations.[3]

Pastures are used produce livestock. Livestock can be moved between fields or herds can be "split" to spread animals between pastures and increase their numbers and productivity. A herd of at least 10 animals is required to split a herd. [3] [5]