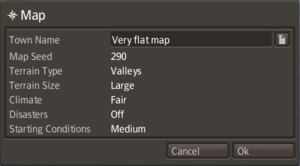 A map's seed is set when that world is created. By default, Banished uses a random number as the seed, but the player can change it. Create a new world with the exact same terrain as a previous world by reusing that world's seed, or use a known seed to play the same world as another player.

The seed of the current world can be found in the main menu by clicking the Map button.

Whenever the game has to generate a new map, it calls upon an algorithm. This algorithm uses a pseudo-random number generator to get values for the size and positions of the mountains, lakes, forests and rivers on the map. However, the pseudo-random number generator is - as its name implies - not truly random. Given a particular starting number (the seed), it will always generate the same sequence of numbers, resulting in the exact same map.