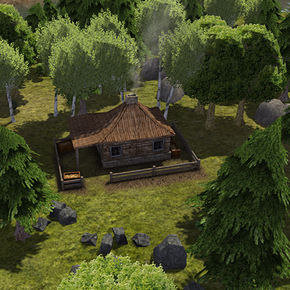 The Gatherer's Hut is used to define an area for collection of roots, berries, mushrooms and onions as an alternative to farming to get food for citizens.

The Gatherer's Hut has a range of 60 squares (diameter).

The production rate depends on the surrounding tree density and not the age of trees.[1]

A Gatherer's Hut in a forest.

Overview of food collected by the Gatherer's Hut.