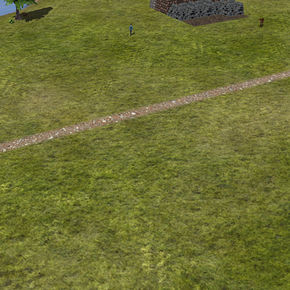 Roads enable your citizens to move faster, making them more efficient.[1] People walk about one square per second (at 1x speed) on normal ground. Stone roads increase speed by about 37%. However, keep in mind that several factors besides roads/terrain alter a person's speed; see Walking Speeds below.

Roads cannot be built on water or steep inclines. Instead, build a tunnel to go through a hill or a bridge to go over water. Generally, citizens will intelligently skip using your road if it's actually faster to do so. However, citizens are still somewhat biased to stick to the roads. This means that a poorly placed road, especially the less efficient dirt road, can actually trick people into taking longer for some trips, especially trips that cross the road diagonally. 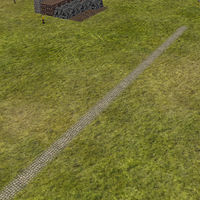 Example of a stone road.

They do not use up any resources, but provide about a 17% speed boost. Great for low traffic areas that could still use a little speed boost for no cost.

Stone roads use up stone, but allow citizens to walk about 37% faster than on normal ground. If the road is long or used a lot by your citizens it is a good idea to use a stone road. [2].

People walk approximately 15% slower when not working: idling, getting something to eat, or finding someplace warm. Nothing else appears to have a consistent impact on speed, including age, gender, job, education, health, season (snow versus clear ground), or even the amount of weight being carried. There is, however, some small speed randomness thrown in, between 0% and -10%, presumably to make crowds of people look more natural when walking together.

Note that it may appear that stone roads increase speed by much more than 37%. The reason it appears that way is that people perceive increases in an object's speed as the square of the actual increase, making a 37% increase feel more like an 88% increase, which is more in sync with the increase in the object's kinetic energy.

Categories:
Retrieved from ‘http://banished-wiki.com/w/index.php?title=Road&oldid=3394’
Cookies help us deliver our services. By using our services, you agree to our use of cookies.