(Redirected from Iron Mine)
Tweets by @ShiningRockSoft
Mine 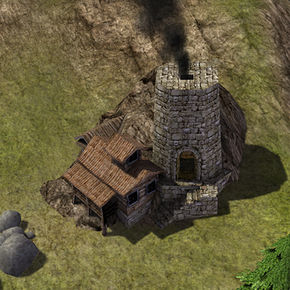 A Quarry and an Iron Mine

The Mine is a structure which allows miners to obtain iron or coal[1]. A mine can produce a maximum of 3500 iron (if only iron is mined) or 7000 coal (if only coal is mined) before becoming depleted. Mines can only collect one resource at a time, but this designation can be changed at will.

Mines, like quarries, cannot be fully removed and will leave an unbuildable area when deconstructed.

Aside from trading, mining is the only way to obtain coal. Citizens will use coal to heat their homes in place of firewood. Citizens do not appear to have a preference and will grab whatever is more convenient. There is not a sure-fire way to prevent citizens from using coal as fuel. Coal is mainly used by the blacksmith to make steel tools, which last longer than iron tools.

Mines need to be placed on the side of a hill or mountain and have a maximum capacity of 30 workers. There are no diminishing returns on workers; that is to say that the thirtieth worker will produce just as much iron or coal as the first worker (all else being equal).

Miners will occasionally die from a cave in, though these cave ins will not affect the other miners or the mine's productivity, aside from the loss of the one worker.